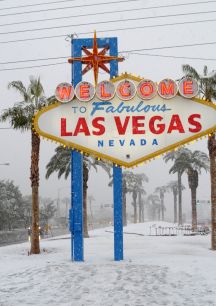 In December 2008, the “strip” in Las Vegas, Nevada received almost 3 inches of snow. “Snow job” jokes aside, that may have been the most unique, unscripted, and last “real” thing to happen in Sin City in the last 25 years.

As strange as this may sound, let’s forget for a moment all the gambling that is associated with “Vegas.”  Gambling is nothing new, and Las Vegas is not the only casino in the world. The sad part is, the world is nearly over run with “houses of chance” with more on the way every day. I have seen a few up close, and personal. It’s no secret that I don’t care for them, but that’s not what this blog is about.  I will spare you any observations of Indian hypocrisy telling tales of tribal forefathers dying wishes to have a casino sit on top of the ancient burial ground, or the laughter I brought upon myself when I realized that not everyone inside the casinos in Monte Carlo dresses, and acts like James Bond, and his merry bunch of models, spies, and Sheiks. No, just about everywhere I went, it was the same group of automatons pulling levers with a bored look in their eyes, and afraid to stop, and walk away, because someone might take over their “warm” machine,  and win big on the first pull after they left!

What has occurred to me is how Las Vegas has climbed into the American perception of “The Mecca of Fun, Center of Culture, Eden of Architecture, and dining experience of a lifetime.” What pure, unadulterated nonsense! To start with, let’s make the analogy to the movie “The Truman Show.” Everything inside the dome is not real. It’s just a gimmick to make you forget you’re in a climate controlled, stuccoed, time deprived steel box, in the middle of a barren, and uninspiring desert. Piped in sounds of a rain forest or waves crashing on the beach; it’s FAKE! There is no doubt that as far as hotel amenities, and food goes, there are some great places in Las Vegas, but when I overhear a man say to his wife walking through “Little Italy” in a fake, and hygienically superior New York, “I really like this city; we should come visit here again, I like the food, and the atmosphere,” I want to “heave!!” Here’s an idea that will follow this whole blog; why don’t you actually go to Little Italy in New York, or the North End in Boston, or Federal Hill in Providence? Go have some Italian food cooked by a woman, her 2 daughters, and brother while one of her sons cuts up bread “on the front side,”  while the other son combs the sidewalk outside doing his best to convince patrons to eat at his restaurant instead of the other “inferior” family restaurant across the street! Visitors of Las Vegas, your being robbed of your own imagination! How about this; tell me you flew in to L.V and stayed because it’s close to the Hoover Dam, the Grand Canyon, and Zion National Park. I can respect that, but If you insist on telling me “fake Pairs, fake Venice, and the pool river at the hotel are a few of the “Seven Wonders of the World,” my only wonder will be; do you feel any embarrassment to know that you would never actually go to France, but couldn’t wait to have your picture taken at the you guessed it, FAKE Eiffel Tower?

And now comes the fun part! Sure, Vegas has Cirque du Soleil, and Blue man Group, but so does Chicago, and Berlin. I don’t remember too many Hollywood movies about bachelor, and bachelorette parties taking place in Germany, but Las Vegas fun has become “a safe, unimaginative, and lazy choice” for a quick getaway. Many times, it’s not even the cheap excursion so many praise. At the same time the “false magnitude of fun” on the “F-Fichter Scale (False Fun Richter Scale) continues to grow exponentially.  The “young guy” stories you hear now go somewhat like this; a guy is getting married, and all his friends want to go for one last “single adventure.” What really happens when the guys go out there? Friend one gets completely drunk at 9 am, is accused of sexually harassing the maids, and is confined to his room by security. Friend two pukes in the pool at 1 in the afternoon, and all of the guys are banned from the pool. Friend 3 spends 23 hours on the phone to his girlfriend begging for forgiveness because he blew off her parents 50th wedding anniversary party to go with his friends to Las Vegas where he remembered how much drama his friends really were, and how much he would love to be back home at the “50th” party. Friend 4 is married. He spends the first half of the trip blowing his money, and the second half begging his remaining friends to lie for him to his wife about how he was robbed at the pool. When the guys return, and people ask how the trip was, they just reply “Vegas Baby!! What happens in Vegas…” blah, blah, blah. Nobody would ever question a bad time in Vegas; how could it happen? It would be like going to the Hard Rock Cafe, and not being sure how to act, or what kind of fun you should have. It’s already figured out for you. So safe. Z Z Z z z z z z z z!

Not ready, or unsure of traveling far? That’s O.K. Need some new ideas? No, I’m not talking Disneyland; the true “Evil Empire,” and possible subject of another blog post. Bachelor party? Plenty of companies offer quick getaway’s packages to places like Miami where you get flights, hotels on the beach, transportation, and tickets to see your local favorite sports team take on the Florida teams. Still no pool-puking allowed! Romantic getaway? Try traveling with the local ski club to Quebec City for New Year’s Eve. You don’t even have to ski. 5 star-hotels, culinary masterpieces for dinner, fireworks, and dancing if you want to. Out with the girls? Cheap trips to the Bahamas’s. Sleep by the pool, swim in the Caribbean, meet a few of the world’s citizens, unique shopping, and free dancing in the town square with live bands at night! Who would have thought?

These things may not be for you, but at least they’re REAL! Yea Baby; Viva that!