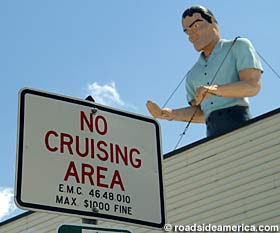 No, this number sequence is not an audio call for a quarterback. It’s not the winning lottery numbers beamed back from the future, or an odd lost Eastern European phone number given to me by Natasha from Krakow (I’m still looking for that one; the number, and the woman). This was the public ordinance number posted on the “No Cruising Sign” as we drove up Evergreen Way en route to the very cool Boeing Assembly Plant tour in Everett, Washington two weeks ago.

I had to instantly sift the massive rush of information, realization, and pop “culture-a-zation,” that slammed into my consciousness to comprehend what I was looking at. Lucky for me, my cousin was driving who not only knew what the sign really meant, but grew up in the town, and was herself at one time, one of those “crazy restless teens” who cruised the streets of Everett. “Cruising Colby” she told me they called it. That was the “hot” strip, before the locals complained, and the “strip” moved out to the edge of town. Once again, this story takes place in the present and is not some movie flashback of “American Graffiti.” Besides still having temporary control of my faculties, I noted the sign stated that the fine imposed for violation of the ordinance was $1000. Yup, that would be a pretty stiff fine for 1957. Pretty stiff for 2014 as well! Pop and not-so-pop music is littered with tales of kids in cars. In my head, I continue to hear more lyrics to songs about kids in cars. David Wilcox; “Six lights down, and six lights back; Saturday they’ll all be back again.” In the 60’s, according to the Beach Boys, she allegedly “got her daddy’s car, and she cruised through the hamburger stand now.” Apparently “she forgot all about the library like she told her own man now.” I was not there when she was “having fun, fun, fun,” but a few years ago, a local city police officer told me that chasing the teenage kids in cars out of the Burger King parking lot was a full-time job on Friday and Saturday nights.

Cruising in modern America does seem to be cemented into the youth culture across the country. When I was younger, I myself may have taken a cruise around the roads in the park on a warm summer night, meeting up with the other kids doing the same; although there were no signs posted, and no fines levied. Once in a while, the local cops would tell you to “get your ass home, and don’t let me see you out here again tonight!” Many years ago, my father; let’s call him “Papa Zulu,” told me how the “big thing” for kids in “his day,” was to attend the local dance down at the Odd Fellows Hall, or the Lithuanian-American Club. During the Great Depression, the vast majority didn’t have the money for the dance, never mind a car to cruise up and down the “strip.” Who would they have talked to anyway; the old men in the horse-drawn cart hauling around ice and coal for delivery?

I love the detail in which the ordinance is written; “no person shall drive or permit a motor vehicle under his care, custody or control to be driven past a traffic-control point more than two times in the same direction of travel within a two-hour period in or around a posted “no cruising” area.”  Ordinance 46.48.010 is real compliance work of art! It ranks right up there with an old Rhode Island Blue Law; Chapter 134 Section 5 (Any marriage where either of the parties is an idiot or lunatic is null and void).

Of course as noted by my cousin, boys were not the only ones out there cruising. I once knew this girl who bought a car. When she was selling it, her brother remarked that she had put 70,000 miles on the car since she owned it. He further stated that 69,000 of the miles derived from she and her sister cruising an 11 block radius of her home while listening to musical “mix tapes” filled with songs of the boys they hoped to meet someday.

P.S. It would be a shame not to leave you a different great “story-song” from David Wilcox about boys and girls and cars. A tad longer than normal, but hear it out and enjoy!