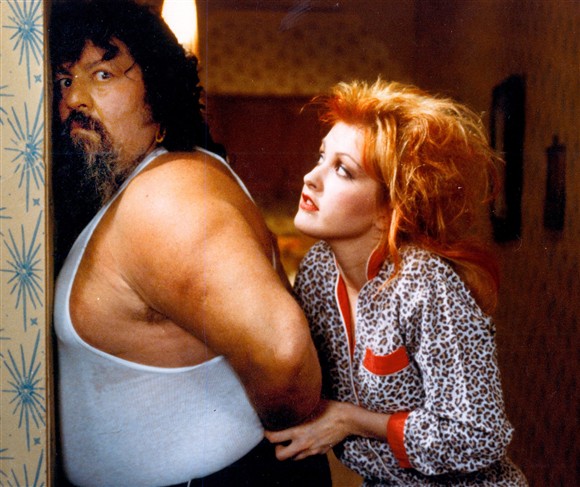 “The phone rings in the middle of the night, My father yells what you gonna do with your life, Oh daddy dear you know you’re still number one, but girls, they want to have fun.” Cindi Lauper

In 1984, wrestler “Captain Lou” Albano, met pop singer Cindi Lauper on a plane. That chance meeting would be the start of a friendship that would last until his death in October of 2009. To me, Lou had one very distinguished claim to fame; which turned out to be two claims, once I started doing some research for this blog post. The second claim is; for a brief amount of time, Captain Lou was the manager for the long time band NRBQ (New Rhythm and Blues Quartet), which just happen to be one of the greatest, most fun bands to see in a bar or auditorium.  If you’re not sure who they are, there’s no sense in me going on (although that never stopped me before) about how I once saw them, AND Roomful of Blues together, blasting the music away on New Year’s Eve at the Rhodes on the Pawtuxet in Cranston, Rhode Island.

Anyway, back in ’84, Cindy needed someone to play her overbearing father in the music video for her then soon to be famous song, “Girls Just Want To Have Fun.” In one of the great scenes, Cindi grabs Captain Lou, throws him up against the wall, and pins his arm behind his back……….classic!

This video would help bring wrestling from the loyal shadows to the center stage of mainstream music; Pop if you will.

It was at this time when I began to realize how popular wrestling had become, and how many adults were following it. In the back of my mind; which may be the actual front of my brain, I started collecting ideas for this observation. Eventually, I decided empirical data in the form of money and television ratings were not enough, so I had to go to a source; let’s pretend I know a guy named Dave. I remember Dave saying once that one of his “naturally unattainable” regrets in life was that he never had a son. This was not so he could pass on his family name, but so he would have someone to watch wrestling with; big simple dreams.

Dave said that when he was a little kid, he loved wrestling. He said one Saturday; his friend’s mother took them to Jack Witschi’s Sports Arena in North Attleboro, Massachusetts. He said he was so excited the night before, he and his friend couldn’t even sleep thinking about the next big day. Years ago, such insomnia in a young boy was usually reserved for Christmas Eve, and seldom few occasions. These days, it happens “all the time;” mainly due to the massive consumption of “Monster Energy” drinks. Dave further stated the boys were shocked to learn that his friend’s mother would rather sit waiting in the car by herself than come inside the 2000 seat arena and watch Chief Jay Strongbow discipline his arch nemesis. In those days, a parent could cherish their peaceful time in the car alone over the anxiety today of letting your young kids out of sight in public in a strange place. “What do you think is the big attraction for adults and wrestling” I asked Dave. He said that besides the general happy memories of his childhood, there seemed to be a prevalent theme growing up following wrestling; “Good vs Evil.” It was plain and simple; there were the “good guys” and the “bad guys.” Conflict and resolution for the “whole world” to see.

Dave said you always knew who to cheer for, and who was on which side; never having to watch your hero take a fall, or find out your heroes might just be mortal after all.

In a complex world, where  the daily news brings so many unpleasant subjects, the simplicity of “knowing which side to be on” is as gone as childhood he said.