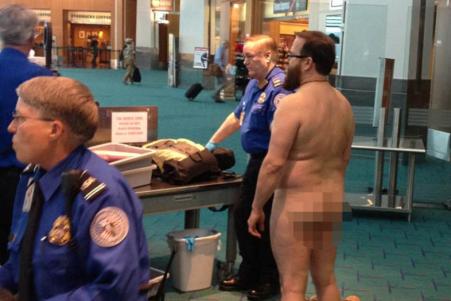 “With the daylight setting behind him and the long road ahead, our unlikely hero approaches the draw bridge in which no man or women deemed unfit for reason unknown will ever pass. With the ever-growing sharp pain in the back of his neck from the long wait, and the apprehension of the task at hand, “Our Hero” slowly………….ALRIGHT, ALRIGHT, LETS CUT THE NONSENSE!!!

The hero we talk about is “just an everyday man,” but one of my new urban folk heroes anyway. His name is John E Brennan. John was not attacking an enemy fortress, or something as Quixotesque as “tilting at windmills.” No, it was bigger than that. He was trying to make his way through the TSA checkpoint at the Portland International Airport.

John was a man flying for business, and on the day in question, was having some problems at the security station. It seems Mr Brennan was being detained because he tested positive for explosives; after he had been through the metal detector and received a “full pat down” indicating no violations. Yes, this is a serious charge that needs attention, but feeling humiliated and lacking the ability to reason or even discuss the allegations with the staff, John decided to strip down naked right in front of everything from the x-ray machine to the coke machine behind him. YOU WANT TO SEE WHAT I LOOK LIKE?  Referring to the less-intrusive “all-seeing” machine (no, not the Coke machine), John said; “They want to see me naked, but they don’t want me to take off my clothes.”

Almost anyone who has flown from that “infamous day,” can at some point understand his frustration. Nobody wants to be unsafe, but as so many have pointed out lately, the process is broken, and people are hesitant to discuss it out of fear that we’ll be investigated, or worse, put on the “No-Fly” list with no way to defend ourselves. After all,  Senator Kennedy once was “accidentally” put on the list, and wasn’t able to instantly snap his fingers and get off the list. What’s the chances that “us” little people could repair our own status in a timely manner should we get unjustifiably put on the list?” Brennan was not mad, violent. or erratic. “I just took off my clothes and said “‘See, I don’t have any explosives,” Brennan said. “The individuals at TSA are just doing their job and the whole organization needs to find a balance between safety and privacy. They use fear and intimidation and it’s got to stop somewhere.”

Well, needless to say, John was arrested, and hauled off to jail for indecent exposure. Fortunately for him, the jail was not in GITMO or a secret torture cell in Romania. This is important, because unlike those detained in the fore-mentioned sentence, John actually got a trial.

During John’s trial, he claimed he was just exercising his right to protest, freedom of speech, and expression. According to news wire sources, ” Multnomah County judge David Rees ruled that the First Amendment protected the 50-year-old frequent flier’s right drop his duds because he did it in protest, not to arouse or titillate the travelers around him.” The charges were dropped.

Some days, “you” just want to “rage against the machine, fight City Hall, stick it to the man.” A bit of advice if you do; be prepared to pay the consequences, and if possible, do it in Portland……they’re a little more free-spirited there.