By The Bike Of The Silvery Moon 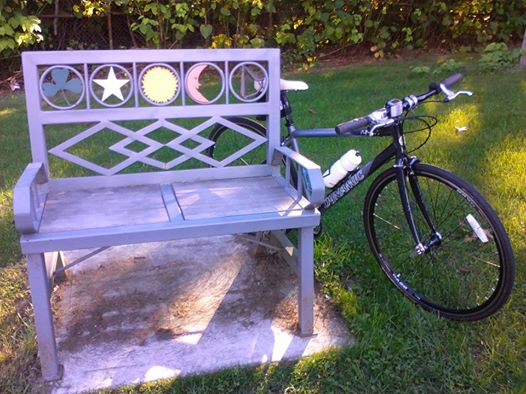 Story and Picture, by Zulu Delta

This year, I will be doing “something new.” I have chosen a “theme.” I will be blogging about biking adventures. This will include riding tales, travel, stories, absurdity, insanity, adventure, and hopefully a little humor and nonsense mixed in; my favorite topics.

Editors Note; this blog originally appeared for Zulu Delta 45 in February 2015. I just loved it. I’ve tried to clean up some spelling and grammar since then. I’m sure there are a few errors left somewhere. ZD.

It’s time. What is it time for? It’s time for the blog post I have been waiting “forever” to publish. Why now you say? Well, I decided way back in the summer that it would be great to write about a magnificent journey I had, and what I observed. I figured such a posting would be really appreciated in the middle of the hard, cold, snowy, unrelenting winter when people need it the most.  Ok, ok (yes, I wanted two OK’s) let’s stop right here, and put if all “out there;” I love winter, I think it’s beautiful, and I love being outside at night when it snows…..THERE, I SAID IT!!  BACK OFF, AND PUT DOWN THE SHOVELS!  The truth is, if I post one more “beautiful Winter picture,” or tell one more person around the Northeast how much I love the snow, or mention in passing that I’m not ready for winter to be over yet, the Lynch Mob (which could be a fascinating blog in Irish history), will tie me to the steps on the front porch, and as the massive icicles slowly drip down on my forehead, the angry crowd will dance around waiting for the crystalline spears to break away from the frozen gutter, and impale my heart.  Yea, there are a lot of people “close to the edge” around here.

Anyway…..Have you ever taken a summer night, full moon bike ride? You’re about to.

As my digital watch flashed 2100 Hours or 9 PM, (yes, I keep 24 hour time; it’s cooler, more efficient, nautical, and easier to match plane and train times the world over), my bike rolled out of the driveway on a warm July summer night as the full moon rose high above.

I know many people who ride bikes, and even they may not be quite comfortable riding on the roads at night. Although I have ridden at night a lot, this would be my longest night ride; about 25 miles. If I had to sum up the whole ride in one question, it would be; why the hell did it take me so long to finally do this?” It was everything I wanted it to be.

I need some more empirical data on the subject, but I believe I was born into this world at night. I now sometimes like to say that I love the night because my body is physically less strained by the gravitational pull of the sun which I find more comfortable. This may be unadulterated B.S, but one thing is for sure, as mentioned above; I fare far better in the cooler weather than the warmer temperatures. Riding in the blazing hot sun is not for me…..at all!

I know the next question is; “isn’t riding at night so dangerous?” Actually, being anywhere near the road in a car, on foot, or biking is always dangerous any time of day, but I discovered something interesting; I think for me, and my bike, riding at night may be LESS dangerous. There is the fact that the route I chose had fewer cars at night, but something else happened; I became a rolling beacon.  Besides having some front and rear lights on my bike, and dressing in reflective clothing, I purchased some blinking LED lights that attach to my spokes.  “Big deal,” you say…….Oh, did I mention that the very bright blinking LED lights “just happen” to be red and blue? The color of most police car lights. “One Adam 12-One Adam 12….Be advised, we have some “fruit-cake” on a bike with suspicious lights!”

Suddenly riding at night is the strangest thing; cars give me a wider berth and slow down as they pass.  Cars in front and behind me suddenly turn down streets away from our intersecting path, while all kinds of people stop and let me cross in front of them. For the life of me, I can no more explain the sudden acts of courtesy any more than I can explain the tugging of the bike frame every time I drive past the doughnut shop.

So maybe now you’re thinking; “hey Zulu, even if you had a full moon, trees block the light, and night is still dark.” This is true, but it has been said billions of times; the body has more senses than just sight, and that’s what gives us additional reasons to ride. How about the warm breeze on my face? The smell of cheeseburgers cooking on an open grill? The laughter of people sitting around backyard fire pits? The scent of the salt air floating off Narragansett Bay with the last whispers of the day’s prevailing Southwest Wind?

Eventually,  I came down the hill, and around the path of the now-defunct Rocky Point Amusement Park, only to be “blinded” by the reflecting glow of the full moon upon the Bay. I enjoyed every minute of it, and it’s just as well I did, because a little further up, the path I was riding disappeared under the tree line, and with my pupils closed up from the bright moonlight, I was now “night blind.”  For one quick second, I considered dismounting my rolling metal, Chariot of Joy (Chariot? Holy God Zulu, were you drunk on this ride; or is it only as you type this?). Oddly enough, there wasn’t a soul on the path at this time of night, and because I knew the general direction, I decided to breathe deep and keep pedaling with almost no vision; which only added to the adventure. I ultimately emerged from the park on to some dim-lit streets and continued on.

Up the hill, and around the bend, I encountered a couple of teenage boys, literally lying in the road with their skateboards on their heads, repeatedly calling each other “dude,” while asking each other what were they going to do tonight.  Don’t waste too much time on this; it’s not because they crashed here, but because they’re just teenage boys. I said hello to them, and all I got in return was some mono-syllabic grunt.  Enough said!

Two miles up the road, I came across a “gang” of teenage girls with skateboards. Would you like to know the difference between the sexes? The girls were actually riding the boards down the street; all the while continuing to text on their phones, and talk to the other girls of course.  One girl screamed out to the others. “Hey, let’s go get some ice cream, and then go down to the beach and look at the full moon!”  Shrieks of joy and laughter boomed their approval.  Of course, the boom I heard may have just been the sound of the moronic teenage boys being run over in the middle of the street as their final thoughts of “why they were so bored,” and “why didn’t they ever meet any girls” flowed through their rock-laden skulls.  Now as I pedaled by, I said “Hello” to the girls. Suddenly, I felt like I was rolling through Rome in the Pope Mobile.  They instantly screamed out “hello, hey, and how are you tonight?” I could write it off to out-going personalities, but I think being outside on a warm summer night just makes people giddy!

I still have fond memories of that ride, but there is one thing that really sticks in my head and I’m glad of it. Along the road, almost halfway through the ride, I slowed down to take a few sips of water from my bottle (I said WATER……..and I mean it!). On the sidewalk rode a young mother and her little daughter on their own bikes. I can still see the look on the little girl’s face as I rode up; full-fledged fear.  Now, without a doubt, we all know this fear was not directed at me personally.  If I had to apply my powers of observation; real or imagined to this case, I would say it went like this; the mother knowing it was a nice night, decided to drag her daughter outside for a short bike ride along the sidewalk. The young girl not quite realizing that daytime is not the only time bikes get ridden, went along apprehensively, even if she wanted to turn around and go home. Now she found herself pedaling down the sidewalk when a complete stranger ALSO riding a bike at night began to approach.  Back in reality, as I got close enough to speak, the young girl stopped her bike and looked like she was about to jump off, and into her mother’s arms. It was at this point, I decided exactly what needed to be done. I slowed down a little more, and as I rode up to her, I casually looked her in the eyes and said softly; “Hello, it’s a beautiful night for a bike ride.” There was an instant of nothingness on her young facial features, but gone was the look of terror. Suddenly a smile almost equal to the brightness of the moon itself lit up the night. “Hello,” she said excitedly. The mother looked at me with an equally kind smile and said: “it’s so gorgeous out tonight.” “Yes, it is,” I said as I pedaled past.”

The thing is, at least in my mind, was that corny unspoken thought, and the “ties that bind” three complete strangers; the mother, the daughter, and I,  all who had the same idea, at the same time, on the same night, so it doesn’t really matter who “says” it first, and who are the “other” two who chime in afterward;

“I’m out riding my bike on a warm summer night under the full moon!”

6 thoughts on “By The Bike Of The Silvery Moon”