A MAN WALKS INTO A TENT…… 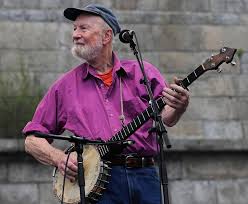 On some other post, I would love to write a little more about Pete Seeger. For now, I would just like to leave a humorous little story about “one day…”

My own personal story is from a few years back at the Newport Folk Festival. I was standing in the corner of the small stage area watching an ensemble of folk singers. There was Dar Williams, John Gorka, and Ellis Paul. The performers were taking turns singing one of their songs. At one point, Dar Williams, in her introduction of Ellis Paul was talking about how she and some of her neighbors were working on a project to clean up the Hudson River. Suddenly, there was a pause and she pointed almost right at me. She then said “hey, there’s one of my neighbors now.” Obviously, she was not talking about me, but 10 feet next to me stood Pete Seeger; all 92 years of him, straight up with his banjo slung around his shoulder with an unpretentious piece of rope. He had waltzed under the tent unnoticed. Immediately, the audience lost all quiet reverence for the musicians, and let out booms of applause and cheers for a prolonged amount of time. Nobody seemed to mind the interruption of the program; especially those on stage. Pete did a few songs and left as peacefully as he had come, minus a second round of thunderous applause, whistles and screams (note to self; “Zulu; take new mandolin out of case, and learn to play ANYTHING!”). As if that wasn’t enough for the Newport memory banks, it was Dar William who stole the show next. Dar recounted how when she first started out playing and performing on a more professional basis, she would go out on the folk circuit; playing anywhere anyone would have her. She mentioned that there were more than a few singer-songwriters who would travel the same circuits together, especially the open mike nights. As luck, and luckless would have it, she was often in the same places as her fellow stage mate Ellis Paul. Dar said that it was “bad’ enough that she was just perfecting her craft, but she often had to play after Ellis. What was the problem? Well, among other things, Ellis was an amazing performer with a gifted voice, and creative stories to sing about. Let’s add some more “charges” she said. He was tall, gorgeous, and all the women swooned as he played. He was like the Mick Jagger of folk. She told how inevitably she would have to take the stage, as a woman, who at the time, musically was nowhere near as talented or as captive to her audience. Then she said “well, it finally took karma long enough to catch up to me, but I wonder how Ellis likes to have to play after Pete Seeger?”

Dar, Ellis, and the whole tent  had a huge smile on their face!