Hello Everyone! Today is the day so many of you have waited for; the last breath of the April 2014, A-Z Blog challenge. I  know what you’re thinking…….THANK GOD!  Our electronic mailboxes will hopefully get a break from Zulu’s insane, confused, delusional, frightening insights, and crazy stories for a brief moment in time. Well……we shall see about that (Lore). I’ll write more on “this” later, but for now, “On With The Show!”

I’m obsessed with the “Zipper lane!” The Zipper lane has several names. The high occupancy vehicle (HOV) lane, or the commuter lane, or the car pool lane, and my second favorite name dubbed by my brother; “the slug line.” He named this while living in Washington D.C because all the cars in the neighborhood containing one driver would stop by the bus stop, and offer a ride downtown to the waiting commuters, so the driver would be able to use the HOV lane. In Boston, it is often called the zipper lane because the lane changes directions in the morning, and afternoon. The sides of the lane itself are made up of Jersey barrier-like walls, joined together that almost look like a larger zipper. The “zipper” is moved by special tractors that shift the lane to be either inbound or outbound Boston rush hour traffic.

This is my problem; somehow, for what ever reason, one of the most damaging blows to my love for mankind is when I get in the “wrong line,” and am instantly punished with time delays. This could be at a store, the DMV, or just a traffic lane. I’m not talking the everyday natural workings of a line in which one line moves faster than the other. I’m talking about where I get in one line, and suddenly the computer malfunctions, or the operator is confused, and has to call for help, or my all time “send me through the roof” line, was the time I’m standing 5 customers back, and going nowhere at all. The attendant at the register delays the whole line as he tries to figure out why he can’t process the coupon from the woman in front of him for 5 cents off a candy bar, only to find out 25 minutes, and 2 managers latter that the coupon in question was taken from “next-weeks” flyer, and will not work in the present. I should have just left the line, but instead, I stayed, and kept my mouth shut. There was a time when I was a young cashier, and things didn’t always go so well. I blame the store, and the manager for not giving all of us a candy bar, and apologizing!

During another such time, as my blood was about to explode, there came a voice; and not the one in my head. It was from the woman behind me in line. When I turned around, her face was beat red, and she said out loud to nobody in particular; “I swear to all that is known throughout the universe, this will be the last time I ever come in this store again.” I looked her in the eye and said; “was that the first time you ever said that?” She stared at me harshly for a moment, and then we both cracked up laughing. Misery loves company.

And that’s how we tie the zipper lane into all this. It’s like the great redeemer! One minute, I’m sitting on the bus, and we’re almost at a standstill, and I’m beginning to cringe: cars not actually in the zipper lane are passing us. Suddenly, we start to gain speed, and I begin to estimate “passage” of those not with us. 10 cars, 50, 200! I begin to giggle like a 4th grader. I can no longer read my book. My eyes are fixed out the window. 250 cars passed. Soon I begin to snicker, and switch to minutes saved, 5, 10, 15! Suddenly, before I can help myself, I am now estimating how long the “non-zippers will be delayed,” 30 minutes, 45, 60. I ‘m beginning to feel ashamed, but I can’t stop my calculations. I know in my heart that I should offer condolences for those less-fortunate than myself, but now I begin to hiss like an “off the reservation mad scientist” at those cars and trucks grinding to a halt to my right; He, he, he, Ha, Ha, Ha; oh look, a fender bender; add another 20 minutes to your commute! Uh-oh, a flat tire just blocked 40 more cars! Watch out, here comes the tow truck! Give me 10, 20! He, He, He! Just as I’m about to cross the threshold so dark, and completely void of any human compassion, I suddenly realize the “death grip” I have on the bottle of peach flavored ice tea in one hand, and the large, half-eaten camel Milky Way in the other hand…….oh crap! “Sorry commuters, that was just the caffeine talking!”

There may be times when I’m stuck in traffic, or behind that woman in the store who waited 20 minutes for the cashier to “check her out” before she started to look for her checkbook in her suitcase sized handbag, but for those times, I’ll close my eyes, and dream about one of my true loves; The Zipper Lane.

Good Night April, A-Z bloggers, and all my friends; new and old still here with me. I’ve enjoyed it! I hope you did too! 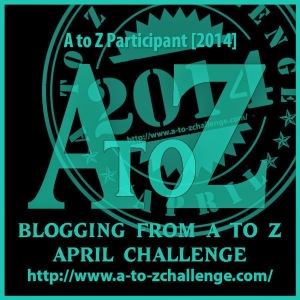