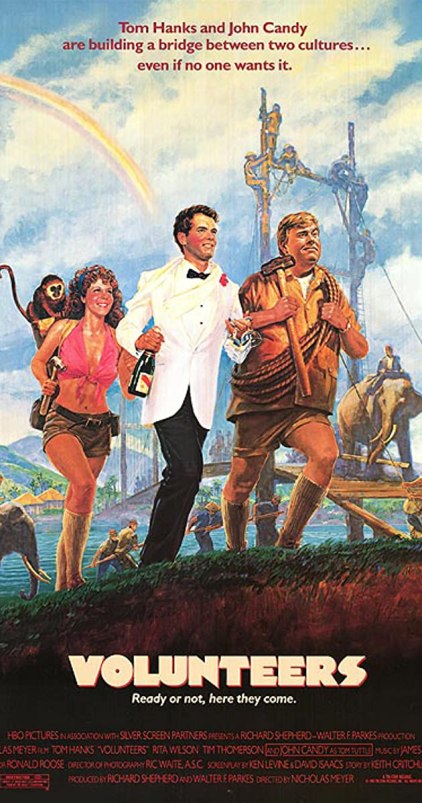 The East Bay Bike Path in Rhode Island……The Old, and The New.

So, how does Tom Tuttle From Tacoma wind up in a biking blog? By letter T, you should know better than to ask!

Oftentimes when I’m out riding my bike, I talk to myself…….NO!!!!! (We didn’t see that coming!) Sometimes I like to imitate the “Great Tom Tuttle.” Tom Tuttle From Tacoma in the movie “Volunteers,” was going to build a bridge; “The People’s Bridge,” and nothing was going to stop him; even a little brain-washing. I modified the voice in my head. “We shall drive the People’s Bike……Over the People’s Bridge…….and then roll down The Peoples Bike Path! Hahahahah! I love it. See, anyone can advocate for social justice and public works projects, especially bike paths without the need to drag an assault weapon and confederate flag to the demonstration. Whoops…….thus far in this year’s A-Z challenge, I have refrained from any “real” political commentary just as I have failed to mention the Partridge Family…….whoops again!! Hey, it’s tradition.

Cathy S. was one of the first people to tell me about building bike paths. She worked with a bike advocacy group to build some bike paths in Massachusetts when she lived there. I was surprised to learn of the dominant reasons that held up projects. She was also one of the first to tell me many paths cost over One Million Dollars per mile from conception to construction.

A lot of great bike paths in America are “rails to trails.” A bike path built on old railroad lines. Cathy told me some other things about building bike paths. Here are a few (in purple)

C.S. -The largest costs involved purchasing easements, cleaning up toxic waste left behind by the abandoned factories the bike path would run through, and actually laying the path including maintenance.  The maintenance portion is always a huge concern.  Everyone is excited to plan the path, but no one wants to maintain the funds for cutting grass and perpetual cleanup.

Z.D.-In a very fortunate way, Rhode Island has several spectacular bike paths. They are built and maintained by the State Department of Transportation, so they have crews, equipment, and the political muscle to maintain the paths.

Cathy, Did you say there are often hold-ups on the project due to lawsuits over eminent domain and small easement problems?

C.S.- Yes, very true.  Some owners, not all, aren’t amenable to allowing the path access on their land.  Some because they’re holding out for large amounts of money, and some for the obvious reason of privacy.  This can cause lawsuits which can be expensive and time-consuming.

Z.D.- Cathy, what would be one or two of your favorite places to ride?
C.S. – We love to ride on bike paths, as we feel safe and can then enjoy the ride.
Our favorite paths would be the East Bay path in Rhode Island, and one we have in
Venice, FL called the Legacy trail.

Bill S, ( look for his name in an upcoming blog) also mentioned that all bike paths should only go downhill and downwind!!!!! NICE ( I think our Norway Blog covered that Bill).

I will leave you a true legend; John Candy as Tom Tuttle From Tacoma.

One thought on “Letter T- Tom Tuttle From Tacoma”