Saved By The Hell

Nobody who has been reading this blog should be surprised that the curiosity finally overtook me, and I HAD to stop and find our what was really going on.

A few minutes from my place of employment is an “establishment” that I often pass on my way home from work. The truth is, initially, there was nothing here that I was ever inclined to stop and browse for. Suddenly, that all changed one day.

The place in question was the bottom floor of a raised ranch house on Rt. 126 in Bellingham, Massachusetts. According to the sign, it is a “New England For Trump” merchandise store. It had been there for some time. I don’t ever remember it being open, or seeing anybody there, until the day it seemed to be quite busy with activity.

What had changed? Was it the “excitement” of the election getting near, the rise in poll status of their candidate, or just the love of “so much winning?”

The truth? Hell had come to town.

During one of my evening passes, I noticed that the “Trump Store,” had transformed. Out in front, in the small parking lot, a new category of merchandise had appeared and seemed to be selling quite well under a new tent at the shop. The new signs out front now advertised masks, gloves, hand sanitizer, gowns, and bandanas; all PPE (personal protective equipment) in the front line of the war on COVID-19.

I’ll take it for granted that “you” know why this all seems so bizarre. Let’s review for those who don’t. Trump is a man who said the Coronavirus was a “Democratic Hoax,” who compared it to the simplicity of the flu, who taunts those who will wear a mask, who denies science, who makes grand and over-simplistic promises as to the end of the pandemic, and on, and on, and on. So getting back to the little storefront in Bellingham,  how is it that these two capitalistic ventures came into co-existence? Did I mention that “Hell” had come to town?

“In which we meet Jimmy; an interesting and likable person.”

Many times when my day at work is done, I am exhausted; mentally and physically. As much as I was dying to stop at the storefront plenty of times, I just wasn’t up for the mental challenge of finding out what was going on; despite my nagging sentiment to get to the bottom of this surreal pop-culture/urban mystery meets twilight zone episode. I finally couldn’t take it anymore and would have been mad at myself if I had not stopped and indulged my curiosity before the circus disappeared into the dark of night. 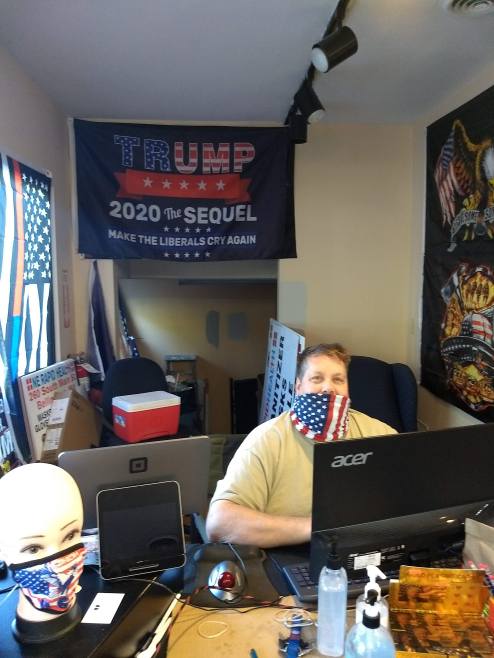 Here’s the bottom line, brought to light by one simple question on my part. “Jimmy, how is it that this “shop” is even open, as I can’t  begin to imagine that such an endeavor is deemed an “essential business and therefore allowed to stay open during the pandemic?”

“It’s not, or was not; until we began to sell masks, sanitizer, and anything else related.” He said.

Jimmy is not the owner of this shop, but a kindred spirit of all it represents. He is helping out a friend and trying to eke out a living during some hard entrepreneurial economic times. Jimmy has/had a thriving “carnival/ local fair” business selling/hawking all things carnival, but now it’s suspended due to the present health crisis. He told me it’s a very lucrative and fun means of living. “In for a penny, in for a pound,” I had many questions while I was there. It’ turns out Jimmy at one time was a trained and able machinist making various equipment at a defense contractor; especially supporting General Dynamics and Electric Boat who are very large and the sole builder of the United States Submarine Fleet. A machinist is a very clever and highly skilled individual. Jimmy told me that business was good as a machinist during the Ronald Reagan years but when George H. Bush came along, it all fell apart, and work dried up. When it did, he entered the carnival sales business.

“That seems odd,” I said. Especially as I was directly involved in the military during those years, and viewed Bush in the same light as I did Reagan. Jimmy shrugged; “Reagan was a military man; Bush was an oilman,” he said. Another odd statement. I told Q (a unique character and sometimes inspiration for some of my blog ideas as well as a huge supporter of all things Bush) what Jimmy had said about Bush. Q pointed out and reminded me of the very bad blood between any politician named Bush and Donald Trump. Trump will never say anything decent about any Bush, and by association, a Trump fan will never say anything good about any Bush politician either.

We talked about many things that day; business, travel, carnivals, manufacturing, immigration, and PPE. I enjoyed my time that afternoon. I told Jimmy that in the spirit of honesty, I was not in agreement with anything I saw in the store that day (with the exception of the mask I bought), but I did enjoy speaking to him. He told me he also enjoyed speaking to me.

As I looked around the shop, I was drowning in a wave all things “Trump;” including the ignorance, racism, The Confederacy, gun violence, anti-science, and all things deplorable; literally as one massive banner hailed “All Things Deplorable.”

I formulated one more question. The most important for my visit.

“Jimmy, what do customers say about the blinding irony; that the only reason this business is open at the moment is that it was saved by selling additional items to fight a “hellish pandemic” and, in which the central figure of this merchandise refuses to believe in,  recognize, admit to, or battle that pandemic unless he can benefit, pervert, or otherwise, reap rewards from?”

Jimmy shrugged (he did that often). “Well, we’re just trying to make a living, feed our families, save our business, and try to make it through another day, hoping that another day in the future will let us go back to our normal lives.

I understand that, and I sympathize. I also have no need to watch or make someone grovel, but I do find the recognition of reality in short demand these days (unsettling so), and the concept of future normalization is at least admitting you’ve  been “Saved By The Hell.”

A kind deed for a hoax.

One thought on “Saved By The Hell”